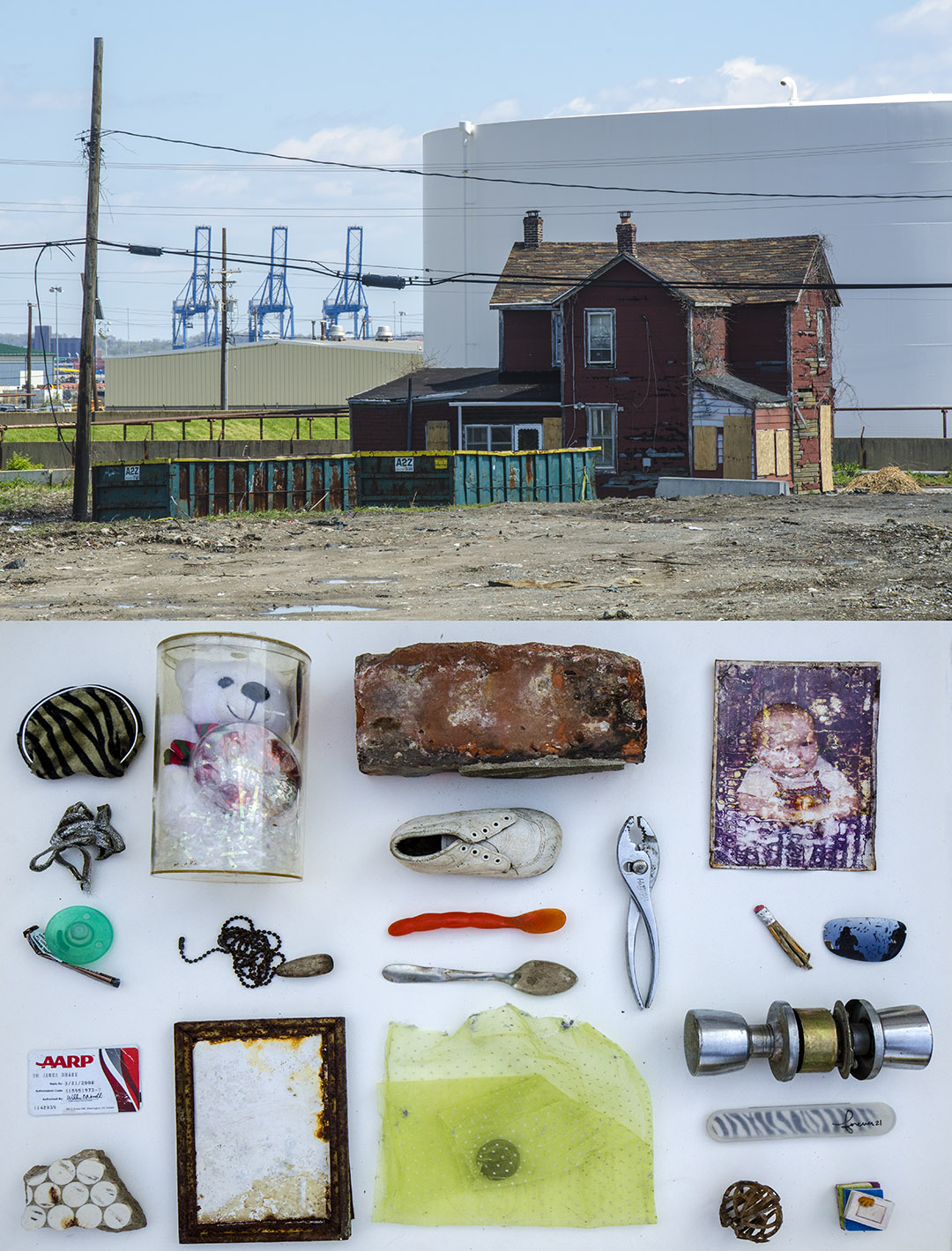 “In 2011, I photographed the last house standing in Fairfield and returned a week later to document the interior of the house, but the house had been demolished with all of Jimmy and Debbie’s belongings still inside…”

The image above, “Last House Standing: Fairfield” is from Mapping Baybrook, a collaboration with Dr. Nicole King, American Studies, UMBC. I photographed the last house standing in Fairfield in 2011 then a week later I returned to document the interior of the house, but the house had been demolished with all of Jimmy and Debbie’s belongings still inside, so I collected artifacts mixed in with the soil where the structure once stood. Fairfield was a community of color living in the midst of the surrounding industrial shoreline. In 1973 Fairfield was upgraded with a proper sewer system, which was a major improvement in the small vibrant neighborhood.

Garrett Park sidewalk murals. Inspired by the IMET biodiversity study, borrowing from cellular structural forms that serve as social compartments for community members to paint into the forms their future or current vision of Brooklyn-Curtis Bay. Location is next to the Brooklyn Enoch Pratt Free Library.

The murals served as a catalyst for renovating the interior space, stacks, community Library spaces, and HVAC after many years of neglect. This included new computers, workstations, and personal hires to serve the community. UMBC, Towson, and Benjamin Franklin High School students collaborated with community members and library staff to design and paint the three murals. The library serves as a major meeting place for community members with access to Garrett Park, located just across the street. Ms. Linda Schwartz was instrumental in making sure the project was a success by supporting me and the community artist team.

Top left image is with Dr. Eric Schott (blue t-shirt), with high school intern Junior from Baltimore Polytechnic, in the Ingenuity Project. Tsvetan Bachvaroff microbiologist is pictured in top right photograph. The team is sampling a “biodisk” (lower right image) on the Patapsco River near the Middle Branch. The top left image is from Hawkins Point that is no longer maintained.

What is the biodisk? The biodisk is a 20” long rack, with a series of acrylic discs about four inches in diameter, separated by two-inch spacers that slide onto a 1-inch pipe, and is lowered into the water a meter below the surface.  The depth allows organisms to grow on the surface of the disks.  The biodisk is the centerpiece of the biodiversity study and Bradley’s artwork.

Examples of artworks informed by the biodiversity study that contains a “biodisk” as part of the installation, UMBC CADVC. The second work was created based on the ecology of Masonville Cove Environmental Education Campus at the water’s edge.

Benjamin Franklin High School art and science students cooperating on a rain garden and mural to divert water runoff into the Patapsco River. Gaby Roffe at the time was with the National Aquarium, Community Engagement effort that commissioned and assisted with the project.

6. Contemporary Archeology – exploring solid waste and its meaning. Hover at the top of the image click to enlarge. Use the backspace key to return to the site.

My work with solid waste began just after graduating with my MFA in 1987 inspired by the infamous Mobro 4000 “Garbage Barge.” (1) Wikipedia. The above works are much more current investigating the cohabitation of organisms found living on solid waste. These works are examples of my growing interest in the role of understanding habitat and ecology has begun to merge and become more focused on the impacts of waste on the environment besides the social and behavioral aspects. The Confocal images were created in collaboration with imaging scientist, Dr. Tagide deCarvalho, director, Keith Porter Imaging Facility, UMBC.

Alleyway Mural project, sponsored by the National Aquarium, Andrea Van Wyk. Community residents who lived adjacent or near the alleyway participated including members of the Curtis Bay Recreation Center just around the corner on Curtis Bay Parklands. One of the few manicured urban green spaces in the neighborhood.