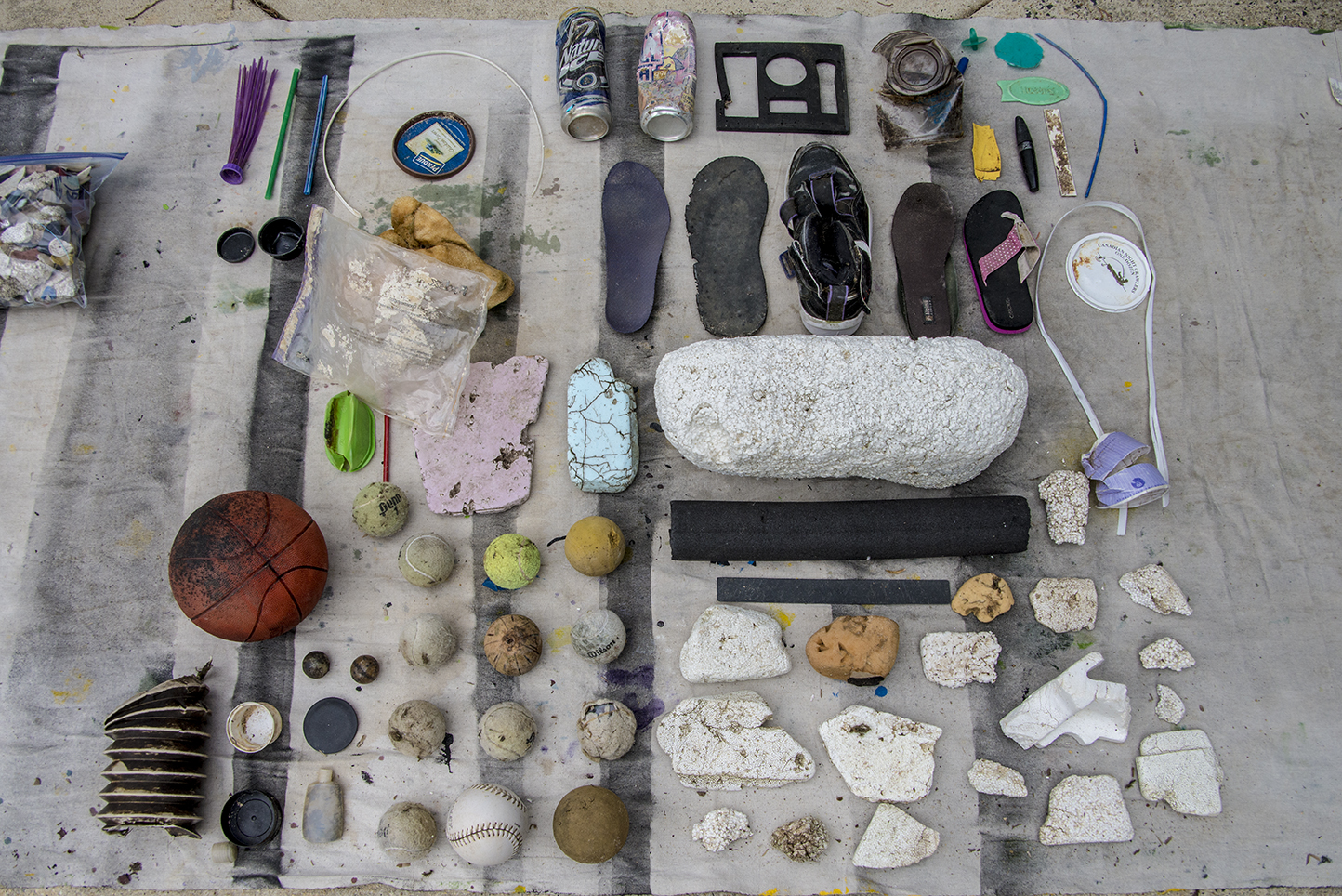 The following projects trace my early relationship to solid waste in America and how we seem to be drowning in our success is creating stuff, unable to figure out what to do with it except sweep it under the rug, deposited in a landfill.

Inspired by the 1989 Mobro 4000 trash barge that traveled halfway around the globe trying to find a place to dump, I created Eco-Core Sampling Project that incorporates eight one mile walks in various areas of Tallahassee, Florida. I collected trash on eight walks, including public and private spaces where trash might be found then installed the collection into the window segmented into eight quadrants. LOCATION: Window on Gaines Street, Tallahassee, Florida, 1989

The trash was weighed and documented by photocopying each piece noting the source, company, a personal address, or other text information which might be pertinent to locating the place of origin.  The debris from our successful consumption appears to be trashing the earth.   If any of the garbage had an address I created a mailing list from this source and sent a card “thanking the consumer for the contribution to the exhibition.” 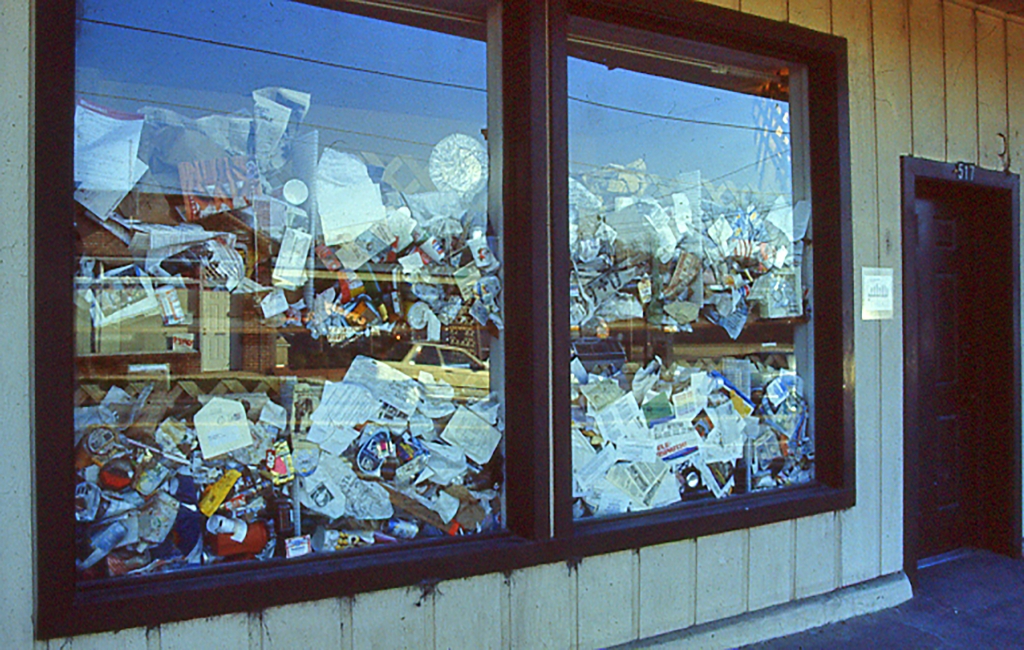 One of the many news reports that documented Mobro 4000 travels south looking for a place to through “away” the NYC’s trash.

Listen to a recent story 32 years after the trash bardge traveled half way around the world, from NPR about how the incident changed the way we view trash and is perhaps the beginnnigs of recycling in America,  by Sarah Gonzalez, Recycling and the Mob.  Or listen below after the New York Times aricle. 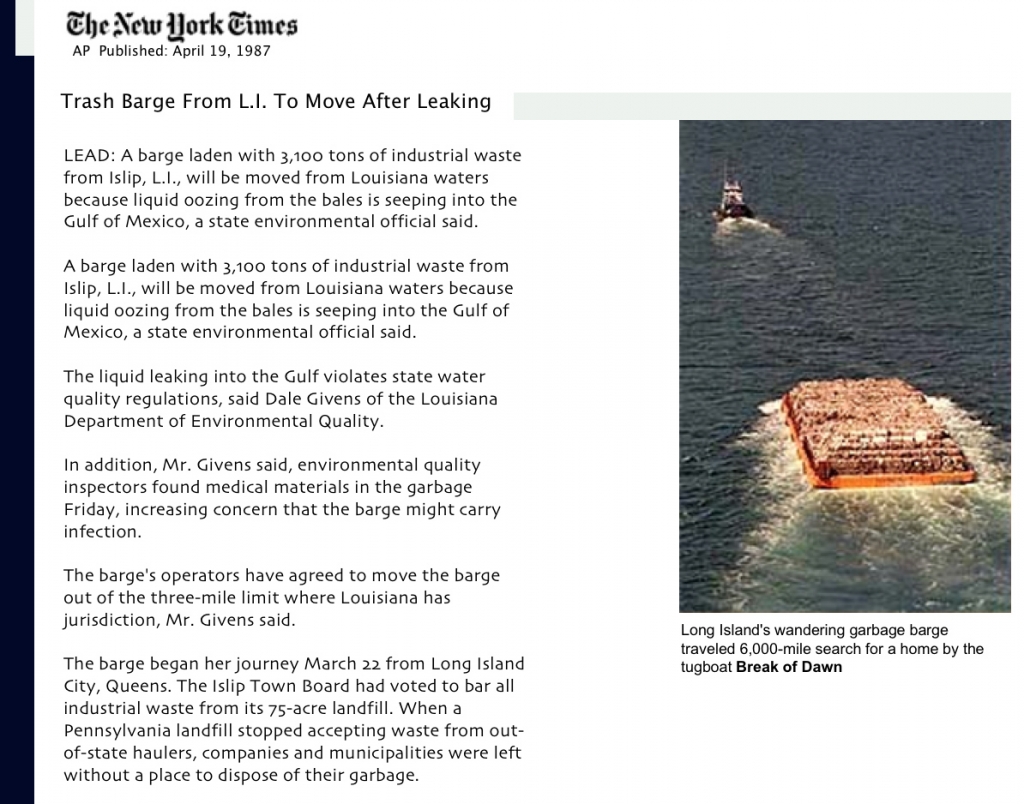 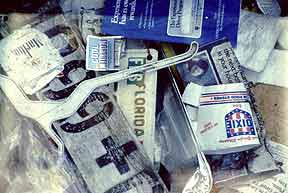 Detail of one of the quadrants from the window.

NEXT project was inspired by the Exxon Valdez oil spill in March 1989  off the coast of Alaska.  We designed and executed a performative installation at X-ART Gallery, New Orleans, LA, February 1989.  Needless to say 1989 was a toxic year for the global environment.   Anything happening anywhere has the potential to pollute further away as proven by many disasters over the decades.

Bradley and Nable performed for over seven hours in a single night for the mixed New Orlean’s art crowd.  Nable was reciting and retyping  environmental disaster stories from around the world since the late 70’s till our present date of May 1989.   The typewriter paper was from a 50′ roll of paper that spilled out onto the floor on the other side of the clear semi-opaque barrier wall between us and the audience.  We performed the mundane task of making a salad adding Exxon oil and vinegar  as we went about our mundane actives of sounding an acoustic alarm by performing amplified voices, sound objects and real time radio channel surfing.  Periodically Bradley take a break and make a salad and then slowly hang the lettuce leaves out to dry on the makeshift close lines that split the space.  At a counter angle, we projected media and text slides onto a weeks worth of New Orleans newspapers tapped to the walls and floor. The approximately 40 slides were taken of TV news broadcasts color transparency with overlaid poetic text.

Example of one of the slides that was projected onto the newspaper covered walls.

View from a styrofoam cup of Stephen Bradley performing on an industrial tub and other found objects.

The Exxon Valdez oil spill in Prince William Sound, Alaska, in March 1989, was the largest crude spill to date in US waters.It prompted many studies on the fate, transport, and effects of the oil on biota in Alaskan waters, as well as on archaeological sites.

natural/unnatural disasters was inspired by the EXXON Valdez Oil Spill