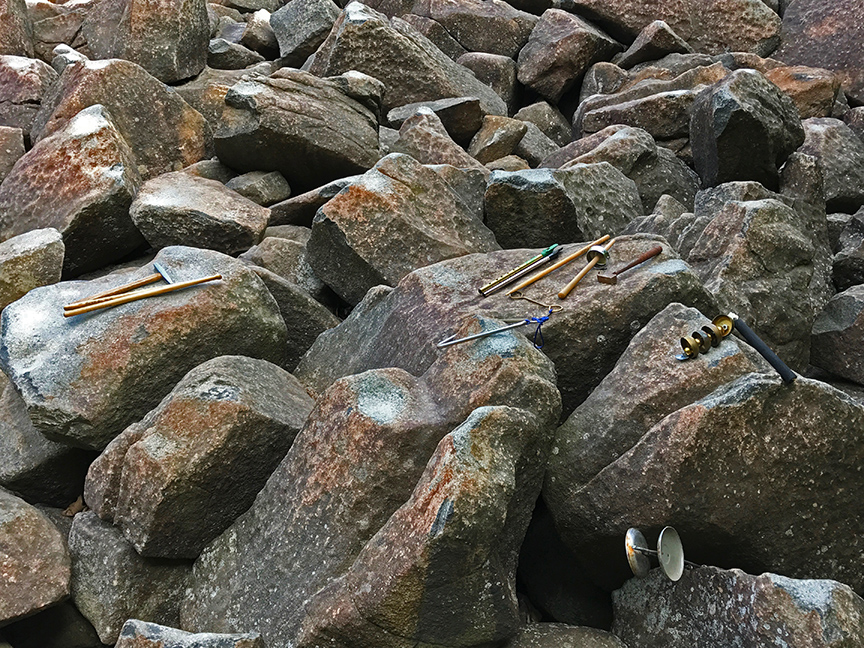 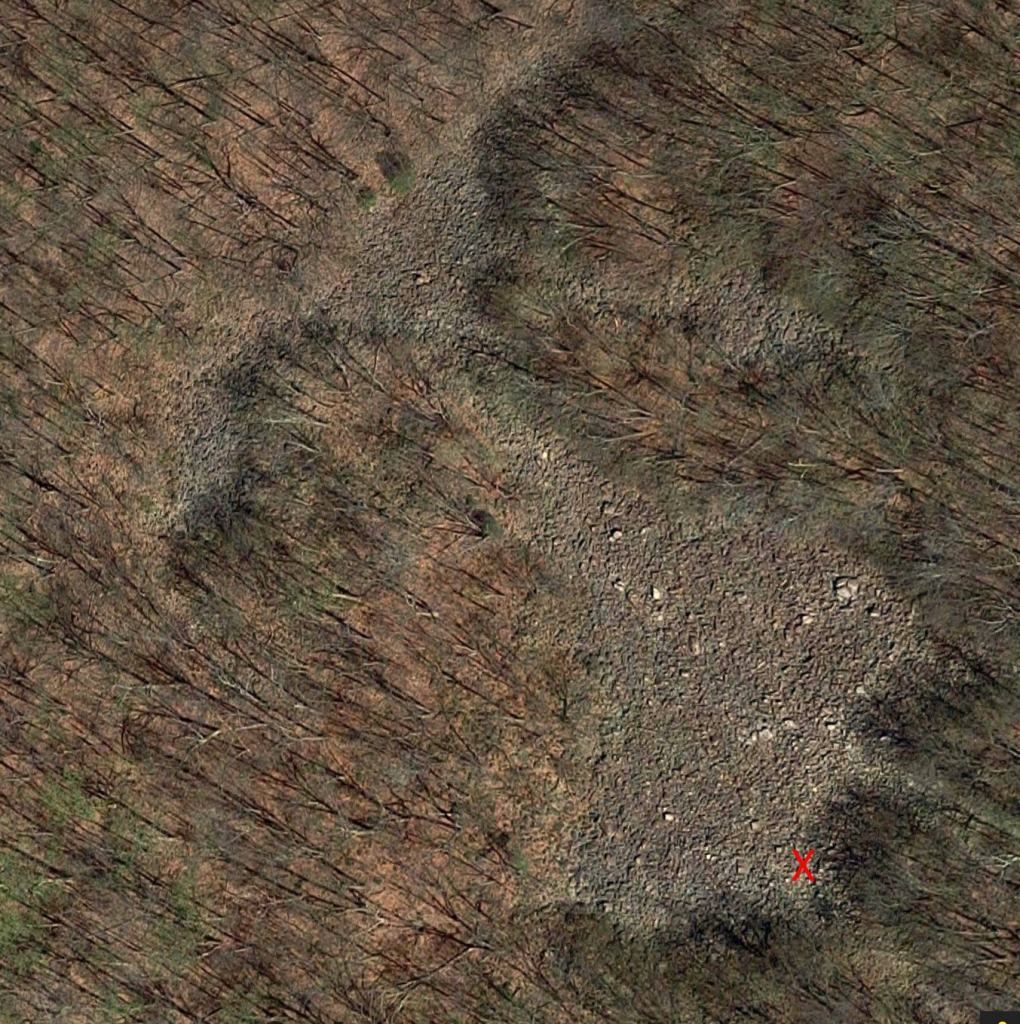 Edited Google landsat image of the area of the Ringing Rock stone field. We were located at the red “X.”

Last June, 14 I met up with Ed Ruchalski from Syracuse at 8:00 AM to perform and experiment in the football size and mysterious seven acre field of boulders located appropriately named Ringing Rocks County Park, PA.  We knew one another through a radio project called art@radio that I started in 1999 that ended around 2011. 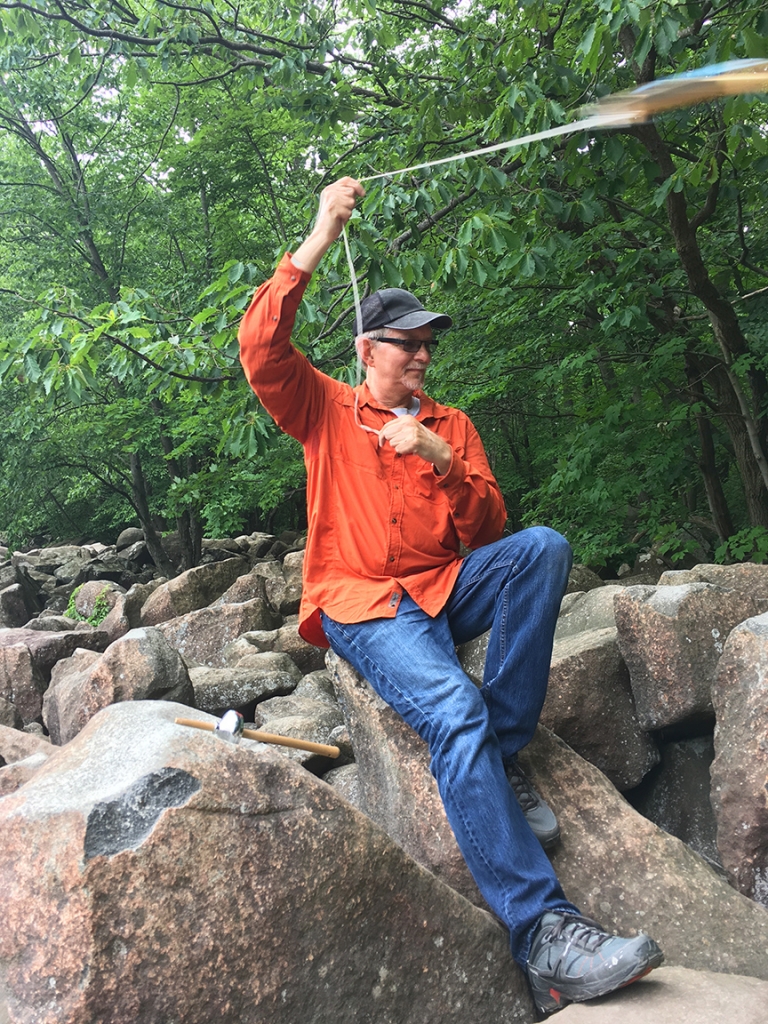 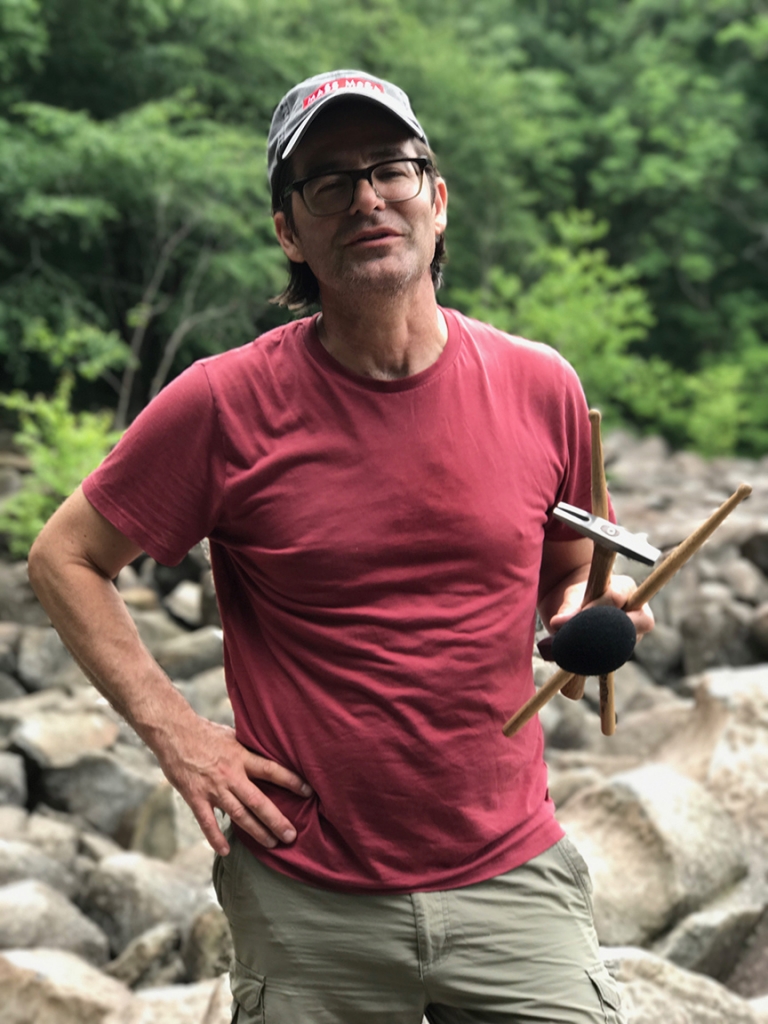 Above is a composition created shortly after the site visit with Ed Ruchalski based on the concept of an “audio journal”  or soundscape collage.

We created rhythmic structures that other sounds were integrated from various instruments we carried with us out into the park. There were moments when we would be subtle and the birds would add their chorus lines with our sounds and visa versa. Several times Ed was performing on the rocks with wooden drumsticks and the red bellied wood pecker not far from us was drumming on a dying tree seeking insects, overhead I was swinging the bull-roarer device.

Ambient sound in the area was mostly wood peckers whacking trees for insects, smaller birds chirping, crows singing, and of course some manmade sounds such as over head planes that passed over periodically flying into the Philadelphia International Airport.  Sometimes the airplane sounds would overwhelm the recording.  Other sounds we heard besides ourselves was wind through the trees, some crickets periodic auto traffic up to about 11:00 AM, when the next group of visitors started showing up, which changed the sonic scene. 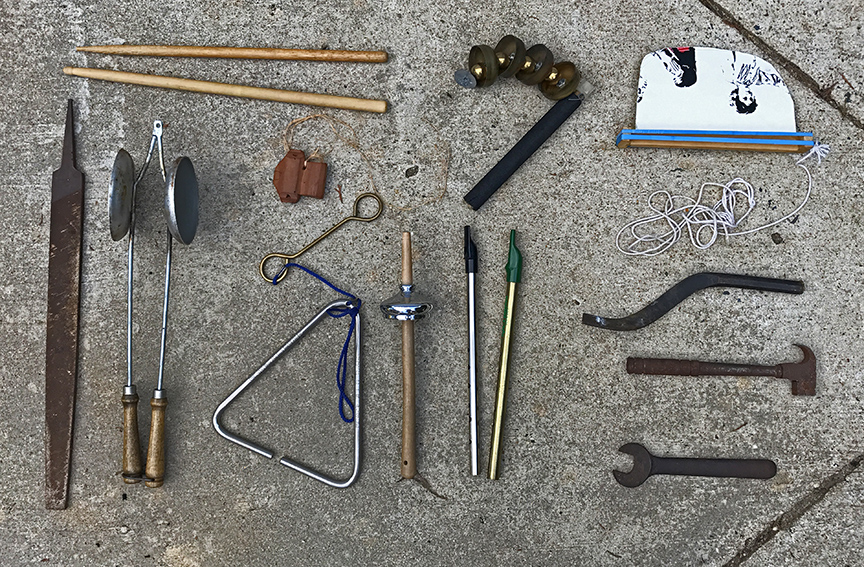 Several of the instruments we used; bells, DIY bull-roarer or as Ed called it a “buzzroarer,” triangle, pan pipes, found objects, Brazilian whistle, old telephone bells, besides hitting the boulders with steel tools and wooden drumsticks.

We virtually were the only visitors to the park until about 10:45 when other pedestrian performers with steel mallets showed up banging away creating erratic rhythmic pattens over their own loud voices. 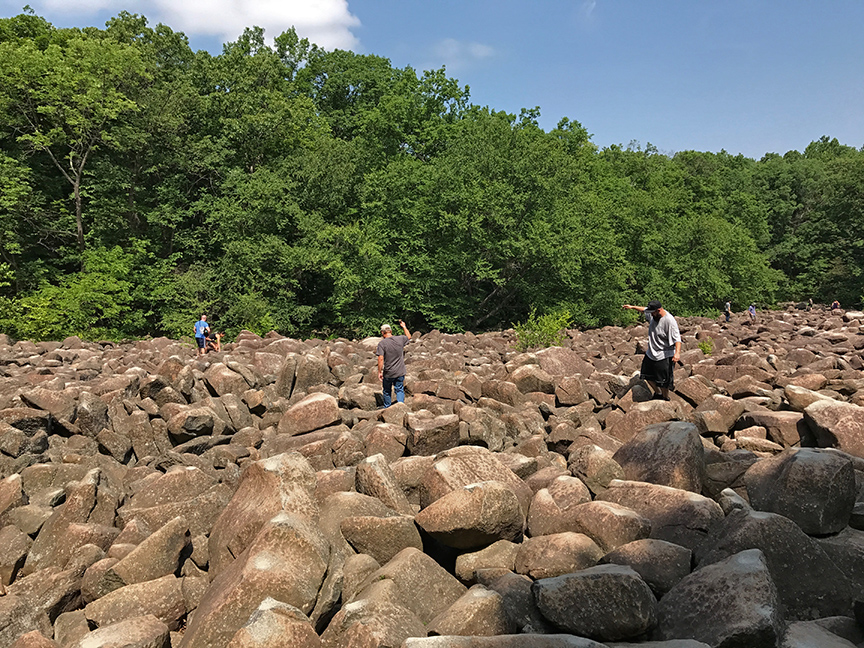 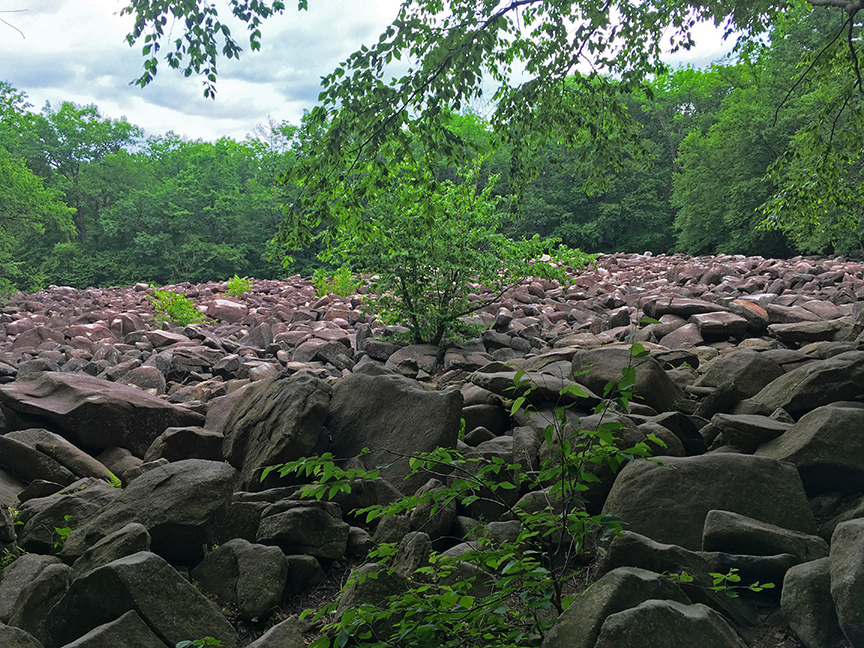 I asked Ed if he knew about David Dunn and the early acoustic ecology work, Music, Language And Environment — he lit up, “yes I know that project.”  We empathized about how complicated that was to record in the field most in particular in the late 70’s since equipment was not portable due to power and bulky equipment designed to be stationary. Those were the days when recording in the natural environment was a big deal, requiring heavy lifting; lugging car batteries, reel-to-reel and other heavy equipment far into the field from an electrical outlet.   The particular piece that came to mind was the one where Dunn and friends performed and recorded in the interior of the Grand Canyon over a three-day period from the 17th to the 20th of June, 1973. 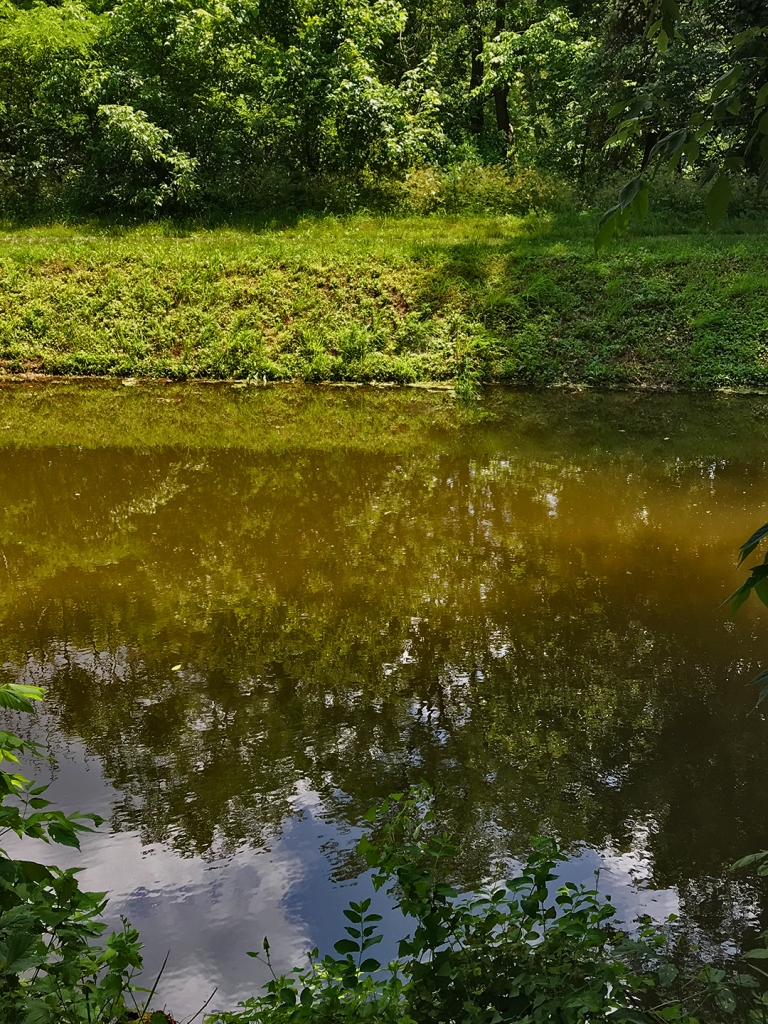 Afterwards we at at this wonderful restaurant Someday Cafe & Roastery next to the canal approximately 20 minutes from Ringing Rock Park ?  After lunch we dropped my hydrophone into the canal, to see what sounds might be present.  [insert sound & photograph here]  So that Ed could get some sound we connected the out of the larger Zoom recorder to the in of his Zoom and we both recorded the sounds.  We also could listen at the sounds at the same time. 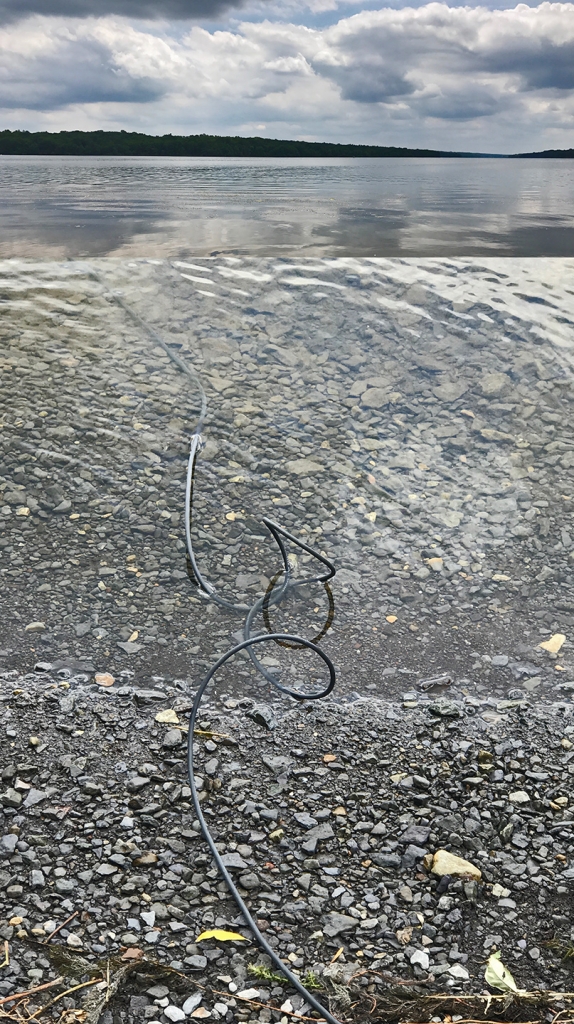 The last site we visited and recorded was Nockamixon State Park due to the larger body of water – composite image below showing the hydrophone cable.